Nokia 9 Pureview Globally will be launched in late January: 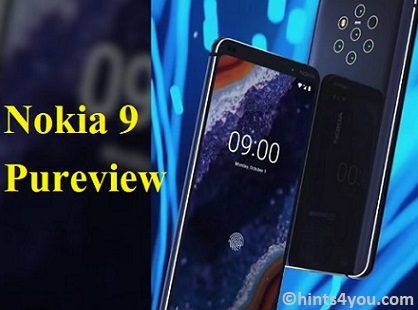 A new Nokia smartphone has also been spotted online. This phone has got a triple camera and a bezel-less design. HMD Global is launching its new smartphone Nokia 9 Pureview in just a few weeks.

The company had given information about the launch of the upcoming flagship phone a month ago.

Nokia 9 Pureview Globally will be launched in late January. A new Nokia smartphone has also been spotted online.

This phone has got a triple camera and a bezel-less design.

Its design resembles Xiaomi's Mi Mix 3. The notch is given on the smartphone and the phone comes with a mechanical slider.

With this, Nokia 9 PureView has also been confirmed with a promo video.

According to the video, there are also some specs about the phone.

The phone will get Rear Penta i.e. 5 camera setup, Qualcomm Snapdragon 845 and wireless charging. Nokia 9 will have a 5.99-inch 2K PureDisplay screen which will support 2K resolution.

This is the same technology that has also been seen in smartphones like Nokia 7.1 and Nokia 8.1.

It supports high-contrast and HDR10. Any SDR content through the 2K PureDisplay screen can be converted into HDR content.

Nokia 9 will come with PureView in-screen fingerprint sensor. This feature will be made available for the first time in any Nokia smartphone.

Nokia 9 Qi Wireless Charging will also be supported. It will be equipped with 6GB RAM and 128GB of storage, 9.0 Pie and 3750mAh battery based on Android One.

Nokia 9 can come in around ₹ 60000 in India. The price of the phone will be kept consistent with other flagship comparisons and features. The price of Nokia 9 in India will depend on its global prize.

Hints 4 You.
Thank you for giving me your precious time.
We will meet again via the next post.